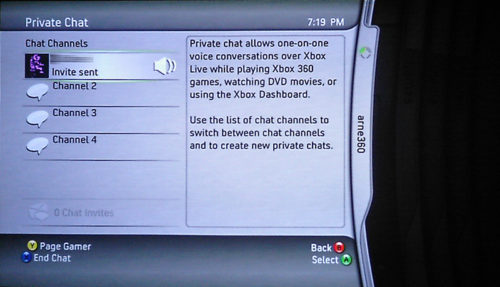 One of the most requested things I’ve seen on the boards, apart from Backwards Compatibility updates, has been adding a multi-user chat “room” to the exiting one-to-one chat on Xbox Live.

When rumors of the update to the Dashboard started circulating a few weeks ago, every few posts was either specifically expressing hope for or requesting the addition of a voice chat feature that would let you have multiple people join in.

Looks like the folks on the Xbox Development Team have noticed the same thing and have addressed why one-to-one chat is the only option available on their Xbox Team blog.

Finding out that the minimum broadband requirements are 64kbps upstream and downstream for all Xbox Live functions and games was a pretty interesting piece of info to come out of it… I know nothing about games networking, but that seems like a pretty small bandwidth requirement and it’s a testament to how the networking has been optimized for online considering all the games work pretty well online.