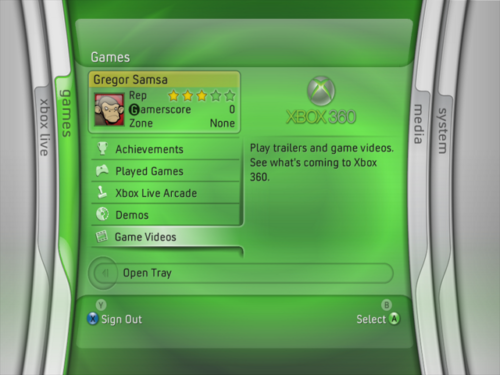 Tomorrow, the first major update of the Xbox 360 Dashboard will be released over Xbox Live. Less than two weeks ago, a few sites and blogs (like TeamXbox, Gaming Age, Joystiq and Kotaku to name a few) were able to get to chat briefly with the Group Marketing Manager for Xbox Live, Aaron Greenberg and/or Jerry Johnson, Xbox Live Group Product Manager. Major Nelson also had a chance to record a podcast with Aaron as his guest to go over a lot of the new features from the Spring Update, among other things. Major Nelson then took some time and went over to on10.net to give Tina an overview of some of the major features in under ten minutes.

Most of these interviews covered some of the most important new features in the Dashboard Update. The biggest is easily the implementation of the “download manager,” which allows you to queue up to six pieces of Marketplace content for download in the background while you continue to do other things. It even pauses the download anytime a bandwidth intensive task comes up, like launching a multi-player session. This feature is something I have seen everywhere on the message boards I work on. It’s probably pretty safe to assume this was one of the most requested features that the Xbox team received. Another major, and also oft-requested feature, is having an option to boot straight to the Dashboard instead of automatically loading the game disc that is in the console when you power on. The option to change this setting can be found in the System > Console Settings menu. This is really welcome, I think I personally want it to boot to the Dashboard the overwhelming majority of the time, as I’ll usually check, messages, friends and Marketplace before I decide what I want to do. I mean think about it, Xbox Live, Marketplace and the Dashboard are such compelling features that there is no small number of people out there who would prefer to start there than immediately jumping into a game. That’s incredible. I think the only thing I see regarding this subject is to provide a way to choose where you boot on startup, similar to how the GameCube has that option available by holding down the ‘A’ button during the power-up sequence.

There are some other important additions, such as the FF/RW option when viewing videos or the Vision camera, that are well covered by the other sites and videos linked above. However, one thing that is interesting to note is that this Dashboard update is the very first such update from Microsoft to have the release info fully documented and posted publicly on Xbox.com. I think there are a few smaller updates in the larger list that may interest people.

Those are just some of the other things in the update I found interesting. I’m sure some of the more technically inclined people or people who have experienced something they are fixing, making more efficient or found the Dashboard was lacking a feature they were missing for will find a few other things in the whole list they will like.

I can’t wait to see what the next major Dashboard update will have in it.