Staci of Killer Betties, Vark and some others from NeoGAF join me playing Ghost Recon: Advanced Warfighter online.

END_OF_DOCUMENT_TOKEN_TO_BE_REPLACED 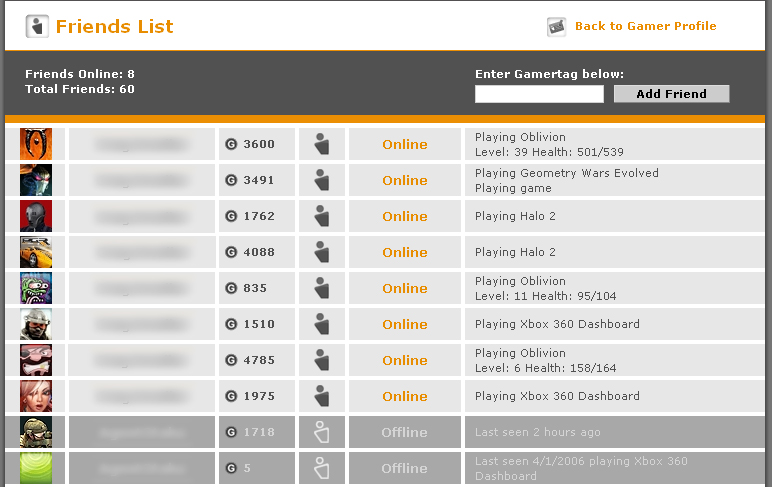 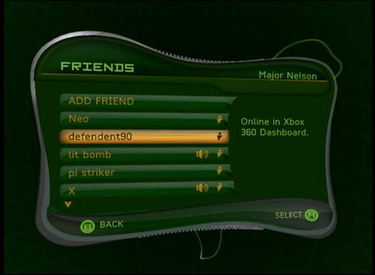 The current iteration of Xbox Live has really spoiled me in a couple of ways. On the original Xbox and Xbox Live, it was nice and important to know who on your friends list was online and what game they are playing. So of course with the Xbox 360 release, Xbox Live tells you that information and then lets you know what they are doing in the game: what level or map they are on, often what particular activity they are doing, status about their character/persona, the score of the (sports) game they are playing, or, like with Oblivion, their level and current health. 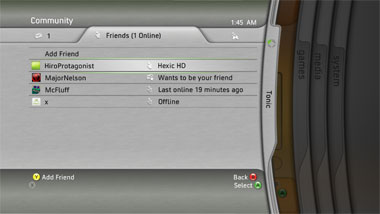 Which brings me to wish that Final Fantasy XI was able to pass along similar information. I’m guessing that, along with the fact that you couldn’t really award retroactive achievements, there might be some technical reason that stands in the way of reporting that type of information back to the dashboard or Xbox.com friends lists. The thing is with PlayOnline was that I knew whomever was online on their friends list was playing FFXI. Now when I see them on “PlayOnline Viewer” I want to know details! FFXI or, unlikely, TetraMaster? Why isn’t it the mysterious Final Fantasy XI entry/icon which only shows me as playing it the day I installed it. I also want to see what their character name is, what server they are on and what jobs and levels they have active at that moment. It just seems… to fit… and satiate my curiousity about people I didn’t know were playing MMOs/FFXI. 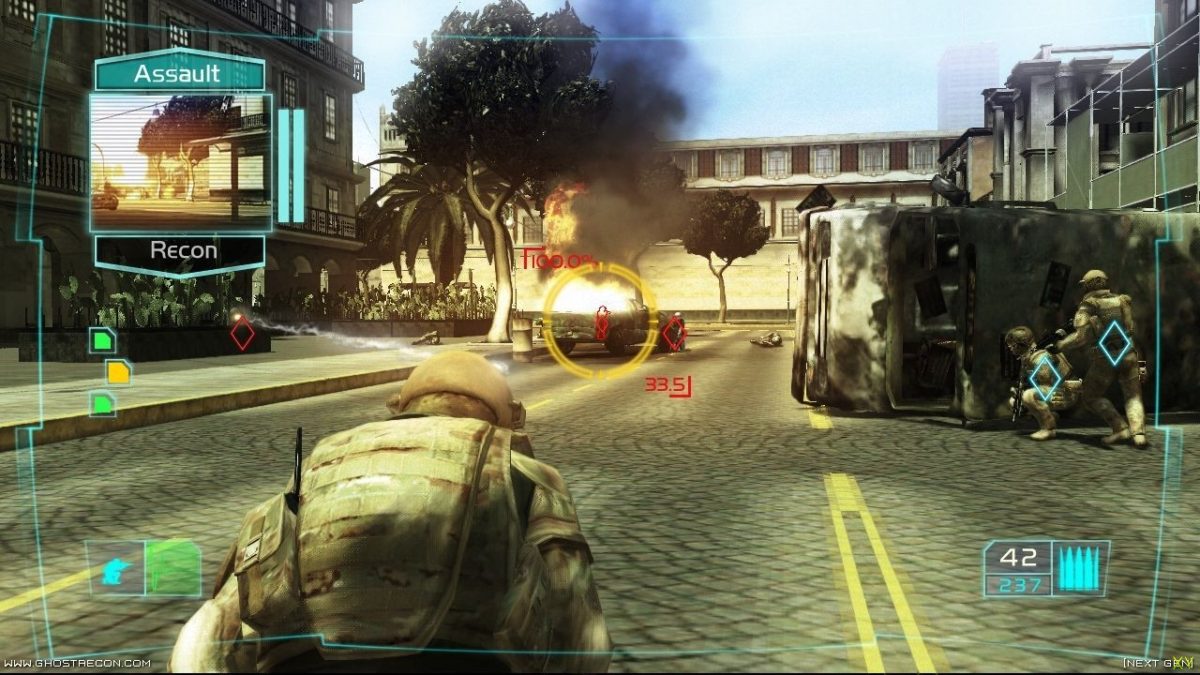 Not like anybody reads this anyway, but I’m going to be playing GRAW on Xbox Live on Saturday, 4/22, at 6pm PT/8pm CT/9pm ET or GMT 4/23 1am. I’ll have Staci from Killer Betties with me playing multi-player. Add my gamertag to your friends list (if you already aren’t) and shoot me a note in game on Saturday. Hopefully there’ll be a decent turnout!

I am now officially registered, booked and reserved for my first E3 ever, to start in just under a month. I will arrive in LA early on Monday morning, probably too early considering what the rest of the week is going to entail. I don’t know yet what I’m doing on Monday, I’m sure it involves set-up, planning and rehearsal. As many people know, Sony’s press briefing has been scheduled for Monday afternoon. I’m sure many of us will expectantly wait to see what announcements should must be made: price, further timing on the worldwide launch, HDD-inclusion, controller design, online features, etc. It is definitely going to be one heck of an evening afterwards.

Tuesday morning is Nintendo’s briefing, to be held at the famed Kodak Theater, where we can expect a lot more news about the Virtual Console, their big franchises and whatever creatively disruptive things they have cooking up Iwata-san and Miyamoto-san’s sleeves. As soon as the Nintendo briefing is over, most everyone will be headed over to the Chinese Theater, which is just a stone’s throw away, for the Microsoft briefing. It took me a while to realize that this was THE Chinese Theater we see and hear about when some movies premiere in Los Angeles. Wow. I’m really not as free to speculate about what the Microsoft announcements will be (since I already pretty much know them) as I can about Sony and Nintendo, but I’m sure it will be all that everyone seems to expect and more.

Wednesday the show starts and so will the absolutely chaotic mayhem, judging from some show floor pictures of E3 2005 and being told that the floor is pretty much constantly like that throughout the show. Commit me if you have to, but I think this is going to be a great time for a guy like me. I don’t remember what my schedule and responsibilities are for each day, obviously I will be busier than I will probably ever be in my life. There will be a couple of “parties” that I will attend (or at least try to) from the looks of it. I say “parties” because they aren’t really the type of party where you just go to have fun and let off steam. In one way or another they will be related to networking, getting to know other folks in various parts of the industry, getting to meet people I talk to often face to face and generally networking. I mean, it will be fun, but again, not entirely super party time.

I also hope that I can find enough time to walk the floor and adequately check everything out. Partly out of curiosity of course, but I’m really interested in being able to see what’s coming down the pipe for publishers across all platforms, including PC. It will be like being a kid in a candy store. Depending on the level of announcements, it will be interesting to see how far Sony and Nintendo are coming along on their first party titles — in the case of the latter company, there hasn’t been much being said or shown. I can’t even begin to think about what from multi-platform and 360 exclusive publishers I want to see. A lot of it is stuff Microsoft Game Studios is publishing anyway — the Japanese titles. The one thing I do know for certain, is that whatever I see, I know I’ll see enough that it’s going to mortally injure my pocketbook this year. And I can’t wait!

I downloaded the demo of Tiger Woods PGA Tour 06 off of Xbox Live Marketplace last night just to try it out. I haven’t played a “realistic” golf game since Links 386 in the mid 1990s. I’ve had a lot of fun playing Hot Shots Golf: Open Tee on the PSP, but the obvious appeal is the arcade feel and format.

I thought the game was pretty good, I mean, some ten years later, you would hope the golf games would improve! The water looks absolutely amazing and I should know, as on the TPC at Sawgrass hole, I exceeded my shot limit with every single ball going straight into the drink.

Next I tried the Pebble Beach Golf Links hole. It took a round to get used to how to aim, swing and most importantly, putt, as my double bogey would tell you. On the next round my drive took me to about 190 yards from the pin. I remember the guy saying the ball will roll towards the water on the green, so I aimed a little more right and took my swing… and I totally felt like I messed it up because I starting swinging forward before the backswing hit it’s apex. Then I watched the ball soar, hit the ground before the green, roll onto the green, curve towards the hole… DOUBLE EAGLE. (!!!)

Here I am, not into golf games and I’ve got my arms raised in the air in excitement over this one round in a demo. I couldn’t top that last night, so that was the last thing I did.